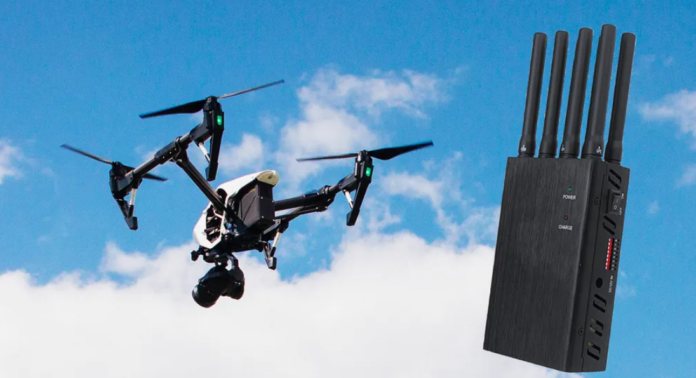 Drones are becoming increasingly popular, for a variety of purposes, from photography to construction. It has become a popular way to capture aerial footage of sporting events, concerts, protests, and even weddings. However, some people are using them for nefarious purposes. These concerns have grown as drone technology has become more advanced and more affordable.

As a result, there is an increased need for a portable drone jammer to protect you by jamming any signal sent to or from the drone so that it cannot send any information back to its controller or pilot about your premises.

Drone jammers are devices that are designed to interfere with the operation of drones. They can be used by both government and private organizations to protect against unwanted drone activity. For example, a police department may wish to use a drone jammer to prevent criminals from using drones to monitor their activities or fly contraband into the prison.

The jamming devices work by sending out radio waves that interfere with the radio signals sent from a drone controller to the drone itself. This causes the drone to lose control of its movement and fall out of the sky. The radio waves emitted by these devices are not strong enough to affect humans or animals but have been found effective in disrupting most types of drones.

How Do the Drone Jammers Work?

The drone jammers work in a way that they emit a wide range of frequencies that can disrupt the signals between the drone and its remote control. These drones are usually controlled by radio frequency (RF) signals. The drone jammers are capable of disrupting these RF signals and causing the drones to lose control over them. This can cause them to fall out of the sky or just make them unable to fly further away from their starting point.

The frequency spectrum used by these types of devices is usually between 1MHz and 3GHz, which means that the drone jammers have a wide range of frequencies that they can jam within this spectrum. Although there are some types that can only jam one specific frequency, others can cover a wider range and thus provide better protection when it comes to being able to stop multiple drones at once.

There are several different ways in which these devices work in order to disrupt the signals from reaching their destination:

Drone jammers and the sort are products that are intended to help you in protecting and reducing the use of drones by other people, but at the same time, have to sometimes be quite careful about how they work with them. This is especially important for people who live in areas where drones will be permitted as long as they do not cause significant problems for those around them.

Thanks to the many advantages that drone jammers can offer, they are considered a highly effective and cost-efficient way to protect any site from potential terrorist attacks. As such, they are currently being used by many worldwide airports, army bases, and government buildings. Although their impact is quite similar, different types of anti-drone jammers work in slightly different ways. They have also been designed to be more or less effective depending on their purpose. So, if you are planning to buy one for yourself, it is important that you first evaluate your needs and decide on the most suitable option for you.

All you have to do is turn on the jammer (which will prevent all drones from working, whether it’s visible or not, until you turn it off again). This means that you won’t have to worry about drones being used as spying devices when your jammer is turned on. If you are unsure where to get a reliable drone jammer, check out the all-deal online jammers for these devices.

How Car Chargers Could Be Helpful For You While Long Travelling

How Car Chargers Could Be Helpful For You While Long Travelling

Working and Operation of Drone Jammers